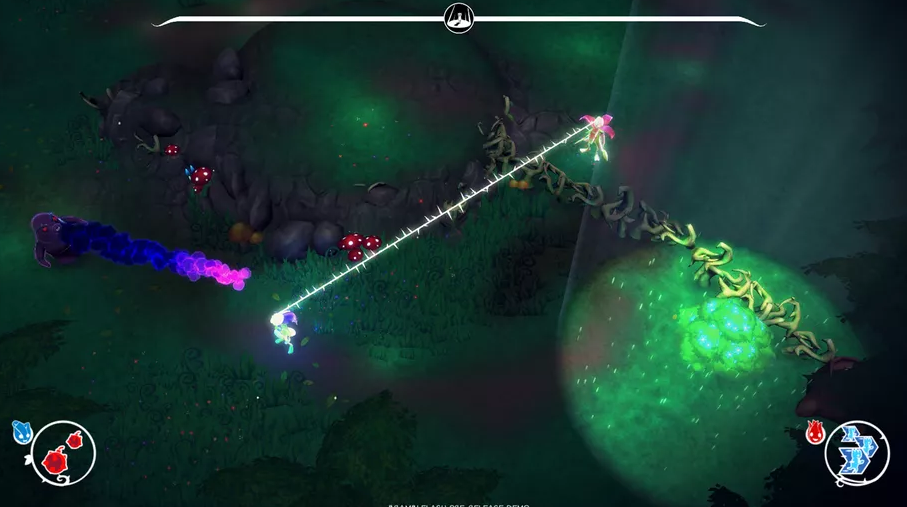 Kew McParlane started makingRivalrywhen he was 12 years old. Two years later, a wireframe version of the game attracted a rather large crowd at PAX Australia. Players take turns whacking each other, moving their characters limbs and weapons until one wins. Turns are marked by a circle, and each player has until the circle runs out to stop moving. As the players get more injured, they become more difficult to control, and the characters just sort of flop around bleeding, which is more funny than it has any right to be. The game iscurrently seeking votes on Steam Greenlight, and you canplay a version online here.

Blight of the Immortalsis real-time strategy in a very real sense of the term. Actions play out over the course of hours, rather than moments. Its a game for people who may not be able to play something really time-consuming, without sacrificing any of the depth of a multiplayer RTS experience. It plays like a board game, with cards that you can collect for your troops. The idea is that you log in (its browser-based) when you can, set a few actions in motion, then come back later. Its a cooperative game, so other players are your allies, and you have to work together to use your respective strengths against the invading undead hordes. Its currently in open beta, andyou can try it out here.

Death Squaredis a diabolical cooperative game for one, two or four players. The aim is to get the coloured boxes on to the circles of the same colour to complete the level, but theres a catch (of course theres a catch). Every time one box moves, it can have an effect on the board. Spikes might emerge, lasers might fire, a phantom block might push your friend over the edge. The aim is to figure out the patterns of these events, then communicate with each other to solve the problem. Death Squared is due out some time next year for consoles and PC.

Fastest thumbs in the… er… living room! Thats what it takes to winWestern Press, a duelling game based on the tropes of the film Western. Each player chooses from one of 16 characters. The duel then takes place, with whoever is fastest at pressing the sequence of buttons down their side of the screen winning. Which buttons are used can be configured, so the difficulty can be set lighter for, say, PC gamers who arent used to handling a controller, to hardcore all of the buttons. Its due out soon for PC and Mac.

I thinkInflatalityhad to be the most magnificently daft thing on the PAX indie show floor. Its a fighting game in the vein of Street Fighter, only you both control Wacky Waving Inflatable Arm-Flailing Tubemen, AKAairdancers, and the result is just as silly and fumbly as you might expect. You use the left thumbstick to control the character, and the right one to control its arm, and you just sort of flail about madly at each other hoping something will hit. There is some skill involved, but overall its bedlam. Its due out for PC, Mac and consoles in early 2016.

Space Dust Racersis a game from a team of veteran EA developers, and boy does their expertise show. Its a Mario Kart-style racing game, and itll look pretty familiar. You race around a track, collecting weapons and power ups to use against your fellows. The difference is that it can support up to 16 players, and its local multiplayer on a single screen. If you fall too far behind, youre out of the race. Luckily, this doesnt take too long at all, so the game takes place in short, sharp, furious bursts of high-octane fun. Its due for release in early 2016 for PC, Xbox One and PS4.

Top-down two- or four-person multiplayer gameLupinballcombines dodgeball with werewolves, because why the heck not? The werewolves enter the arena, scrambling to collect the glowing white orbs. When you have enough, you can fire off a ball, which bounces around until it connects with another player. Thats it! You have to collect orbs, fire balls and dodge the other wolves balls to be the last wolf standing. Add in trick stages, such as a moving music box floor or a slippery ice floor and it turns into a riot. Lupinball is currentlycollecting votes on Steam Greenlight for PC.

Ascent: The Space Gameis quite possibly the most ambitious game I saw at PAX 2015. Its a player-vs-environment MMORPG set in space, with 270 billion star systems based on NASA maps. The idea of the game, artist George Karandais told me, is to move away from EVE Online-style PvP combat, where you can go away overnight and come back to find everything destroyed. Instead, the focus is on cooperation, exploration, trading, farming, manufacturing, research, mining and building. Players will work together to expand the human reach into the universe, forming governments and building jump gates as community mega-projects. And for the combat-lovers, occasionally fighting battles against NPC foes. Itscurrently available for PC via Steam Early Access.

Armed and Gelatinousis a four-player take on bullet hell-style gameplay. Each player is a colourful jelly blob, zipping around the screen collecting weapons to take out the other dudes. The catch, and theres always a catch, is that whenever you die, you drop all your collected weapons, and anyone can just swoop in and grab them. The more weapons you grab, the bigger you grow, and the easier you are to hit, so there is a sacrifice. The result is a highly competitive explosion of lights and colours. Its coming out soon for consoles and PC.

If youre prone to thalassophobia, you might want to avoidDepth. Its a multiplayer game for up to six players: a team of four divers against a team of two sharks. It started life in 2009 as a mod for Unreal Tournament 3, which should give you some idea of the terrifying first-person gameplay. Divers, who can collect treasure from the seafloor for upgrades, are equipped with weapons such as harpoons and guns, and sharks have their stealth and teeth. Its currently available for PC fromHumbleandSteam.

GoatPunksis a madcap king of the hill-style party game for up to four players, racing to the top of the mountain to rain fire and bombs on their foes and claim the title of mountainiest goat (probably). You have to dash up the mountain, or scaffold, or volcano, reach the top, and stay there for 30 seconds without being knocked off. You can use weapons, but climbing goats have the ability to shield so maintaining top position isnt as easy as it sounds. You canvote for GoatPunks on Steam Greenlight now.

RememberDesert GolfingParty Golfis what youd get if you took Desert Golfing and added weird ball shapes and local four-person multiplayer. Each level is procedurally generated, so you never get the same one twice, and different shapes, such as football, banana and square, can be chosen for the balls, which changes up the physics of how they land and bounce. There are also offensive moves the players can use against each other so youre not entirely reliant on trajectory. It makes for a really silly, but fun, party game. Party golf iscurrently funding on Kickstarterfor PS4 and PC.

Originally conceived during a 48-hour global game jam,BrambleLashcombines both cooperative and competitive multiplayer for up two four people. In order to play, two players must link together, creating a stretchy, thorny vine that you drag around the screen to destroy both other players and mutual enemies. There are game modes where all players must work together to eradicate foes (but can still hurt each other), and game modes where two players fight against two players. However, when you respawn, you can link up again with any other player, so teams will change several times over the course of a single match. Its due out by April 2016 for PC, Mac and Linux.

Death Stairis a really interesting, asymmetrical idea. One to three players (Runners) run up a long set of stairs while another player (the Gunner) throws stuff down to keep them from reaching the top. What really makes it hilarious is the ragdoll physics. Every time you get knocked off your feet, you go tumbling in an incredibly floppy fashion. The winner is whoever reaches the top of the stairs first. If no one makes it up before the time runs out, the Gunner wins. The game iscurrently funding on Kickstarterfor Steam. You can download a playable alpha demo on the Kickstarter page.