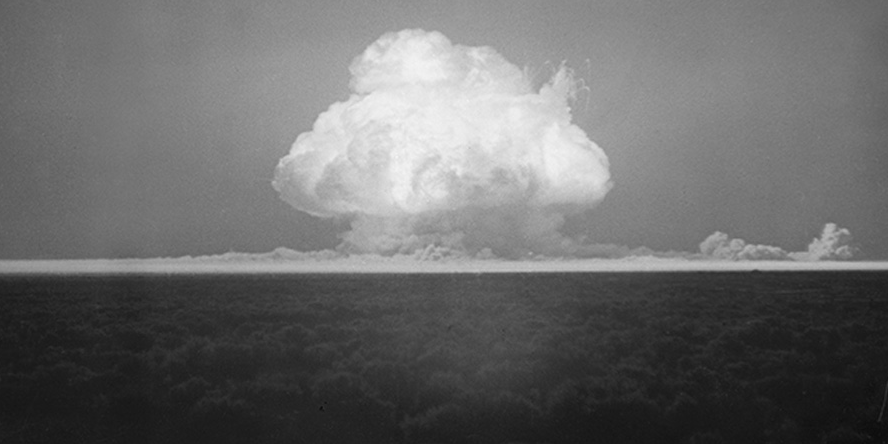 This shelter preserves an area of ground at Trinity Site that still has a layer of Trinitite, a glassy residue left over from the nuclear test in 1945. Visitors still scour the ground looking for bits of Trinitite, but it is illegal to remove samples from the site.

The McDonald Ranch House sits a couple of miles away from the Trinity test site. The windows of the ranch were blown out during the detonation, but the building was restored and is open to visitors during the Trinity Site open house.

Only a small scrap of footing survives from the original structure that held the bomb at the Trinity nuclear test site. The rest of the structure was vaporized during the explosion.

This bomb casing is brought in for Trinity Site visitors during the biannual open house at White Sands Missile Range. Its a later version of the Fat Man bomb that was detonated over Nagasaki, Japan, in 1945 after the nuclear test in the New Mexico desert.

The radiation levels at Trinity Site are 10 times higher than the natural radiation given off by the surrounding landscape. The exposure from visiting Trinity Site for an hour is less than that from a cross-country plane flight.

Trinity Site is located in Jornada del Muerto, a sprawling desert basin in the middle of the White Sands Missile Range. The land is home to scrub brush, rattlesnakes, and roaming herds of pronghorn antelope.

Visitors to Trinity Site circle around a lava rock obelisk that marks the detonation site, taking turns for photo opps at ground zero. Trinity Site is only open two times a year — in April and October.

A lava rock obelisk marks the spot of impact for the Trinity project atomic bomb. The bomb detonated at this point on July 16, 1945. CravesNerdy New Mexicoseries kicks off at this historic site.

The McDonald Ranch House was repurposed by Trinity scientists as a clean room area for assembling components for the nuclear test. The windows were sealed off, and workers had to wipe their feet before entering in an attempt to keep the dust down.