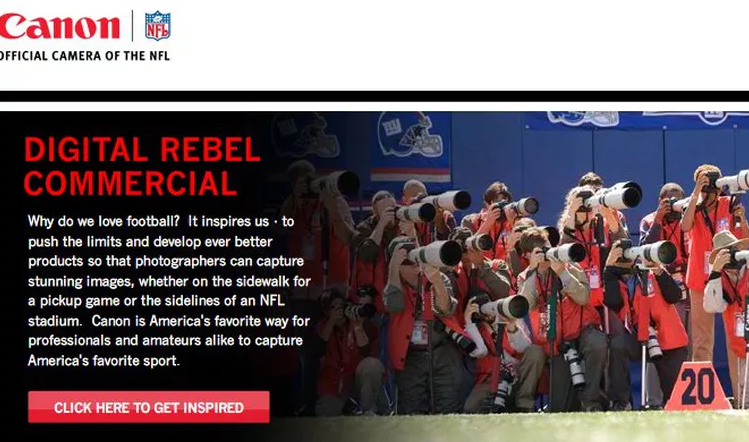 As you can see, theres no lens at the end of a lens hood–that would defeat the entire purpose! I find the altered image particularly disturbing because I own several of these beautifulwhite lenses, and its just sounnatural. Look again at theNewsweekad and you can see how stupid those lenses look with the lenses painted on to the end of these massive lens shades. And you can see how ridiculous isthe claim that the NFL makes, which is that the logo on the vest is just acknowledgment for financially supporting the manufacturing of the vest itself, not an advertisement. Visible or not, Canon has used these photographers to tell a photographic lie in a print ad.Its advertising!

As an industry leader, Canon should know that the first job of the photojournalist is to faithfully and accurately report the news through images, not to become an image unto themselves. Forcing photojournalists to become props at the events they cover violates the first principle of the job. And now Canon is using just such images to promote its gear:

Earlier this year theNational Football League(NFL) announced new security rules requiring that all professional photographers wear NFL-issued red vests or lose their stadium access. What the photographers discovered was that these NFL-issued vests also carried theCanonlogo, and that has led tooutrage and protests across the professional community. Turns out that outrage was justified.

Sadly, fewer people and organizations are upholding high ethical standards as companies find new ways to push people from neutral to biased territory. That in turn makes many of ussuspicious when we read a glowing review in a magazineor on the Web. And yet, some crave-worthy products are worth buying. And some products are of such quality that they are worth recommending. I have bought and used Canon cameras and lenses for nearly 30 years, and they are fantastic products in every way: mechanically, electronically, and optically. As products go, I recommend Canon. And no, I have never been paid a penny by Canon to endorse its gear. So whats the beef?

CNET senior staff writerStephen Shanklandcovered this controversy in aNewsBlog posting, and theNational Press Photographers Associationmakes it quite clear what Stephen reported: that Canon put professional photographers into an ethical pickle, and they are furious. So furious that theChicago Tribune, for example, has decided that if the NFL wont change the vests or their rules, they willcover the NFL without visuals.

Be respectful, keep it civil and stay on topic. We delete comments that violateour policy, which we encourage you to read. Discussion threads can be closed at any time at our discretion.

Canons lack of judgment provides an interesting 21st century object lesson. Perhaps next year my daughter will be readingThe Red Vestrather thanThe Scarlet Letter. What a shame, because those who wear the vests are not the guilty, but the victims.

The professional photographers were right to cry foul on the NFLs collusion with Canon. Now those who wear the vest have not only the shame of ethical breach, but the degradation of appearing as props in a blatantly manipulated image. What does this have to do with parenting and technology? Canon is a leader in digital photography technology. But its advertising campaign stinks by corrupting those who are responsible for reporting the truth. We have ample evidence that ethical compromise is a slippery slope, leading good photographers to makequestionable choices. Unless we are prepared to doubt everything reported that we do not witness firsthand, we need to do more to protect, not pressure, the integrity of photojournalists.

But that story was already told, its consequences predicted. What makes this report news is the following image, copied from a print ad inNewsweekmagazinelast week:

In theory, any random Joe should be free to endorse any random product and, if they are lucky, be paid a fair price to do so. But when a person of a specific profession makes a specific recommendation related to that profession, it should be completely clear what compensation, if any, is being paid. And such compensation should be fairly negotiated between the two parties. Would you want to know if your doctor was being paid to push a drug on you (or that the drugs regulator has a financial interest in the companies they regulate)? Would you want to know if your financial planner was paid by companies whose stocks hes recommending (or that they dont even know what they are selling)?

Canon, who makes fantastic cameras, uses the NFL to force professional photographers to choose between ethical behavior and no paycheck. Time to call them offside.

Do you see that these are almost the same pictures? Except that thelens hoodsin the online photo have been enhanced in the print ad. Heres a better picture showing real lens shades in use