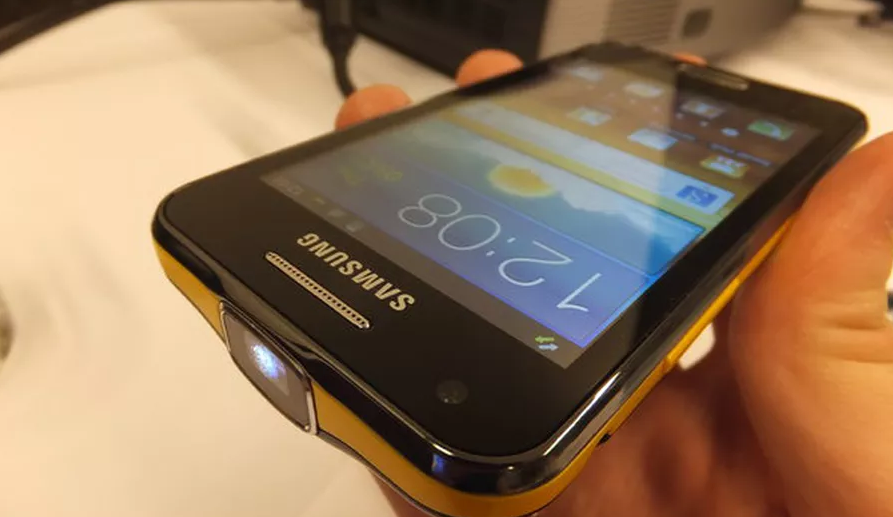 Samsungs showing off a new toy at this yearsMobile World Congress, and its a bit of a weird one, to tell the truth. TheGalaxy Beamis anAndroidsmart phone that contains a teeny-tiny projector, for digitally spraying your photos, videos and games onto nearby walls and ceilings.

Disappointingly, the Beam is running Android 2.3 Gingerbread rather than 4.0 Ice Cream Sandwich, the very latest version.

The Beams projector is triggered by pressing a little button on the side of the phone, rather than being an option thats available with specific apps. That means youll be able to project anything you want, even if its boring stuff like the Android home screen.

The phone itself is quite chunky, with modest specs. Theres a 5-megapixel camera on the back…

Heres the front of the Galaxy Beam, looking inconspicuous and ordinary.

…and a 1GHz dual-core processor inside. Youll get 8GB of storage, which you can expand using a microSD card.

The projector is triggered using this button on the side.

Youll also need to keep the phone perfectly still while youre projecting, or slight wobbles in your hands will make the picture shake distractingly. Samsung said its working on accessories for the Beam, so fingers crossed these extra bits of kit make the phone a touch more useful.

Elsewhere specs are on the modest side. Youll get a 4-inch display, a 1GHz dual-core processor, a 5-megapixel camera and Android 2.3 Gingerbread, notIce Cream Sandwich. Boo! For more of our first impressions on the Beam, I recommendheading over to my in-depth hands-on preview.

Ive gone hands-on with the Beam, so click through the photos above to examine this quirky device in exquisite detail.

CNET may get a commission from retail offers.

If youre dead excited to see what other weird smart phones and tablets your favourite companies are showing off at Mobile World Congress, keep your browsers trained tothis page. Finally, let me know whether you think sticking a projector in a phone is a genius move or the daftest idea Samsungs had in a while, by sticking a message in the comments below, or over on ourFacebook wall.

The iPhone XR in blue looks stellar under a macro lens

The projections this chunky little device blurted out were colourful and clear (I saw it demoed on the ceiling at a distance of perhaps 2 metres), though youll definitely want to use it with the lights off — once the lights in the room were turned on, it became very tough to make out the projected picture.

But take a peek at the top, and youll spy a projector. Gracious!

I thought the projections looked good, but only in a darkened room. Light is not the Beams friend.

After NASAs intense InSight Mars landing, heres what happens next

After NASAs intense InSight Mars landing, heres what happens next