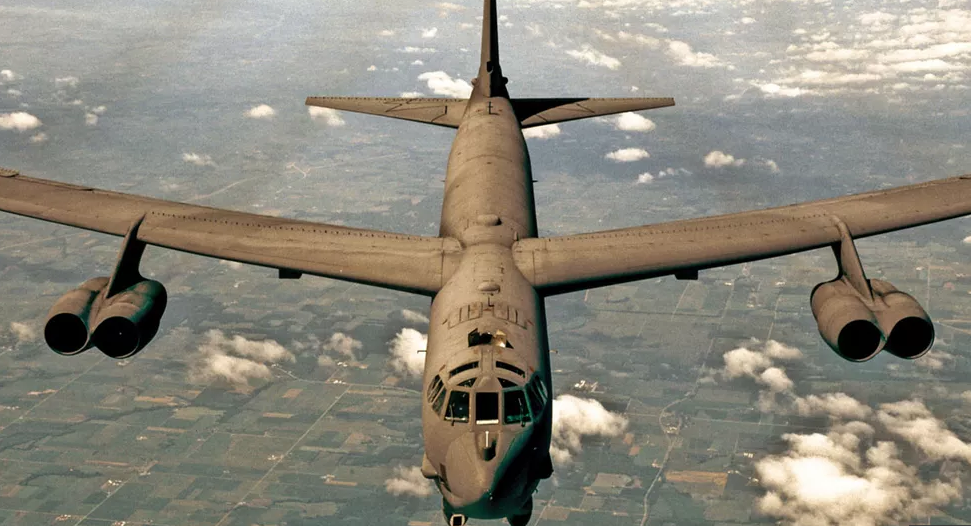 B-52 aircraft have carried more than bombs and cruise missiles. Theyve also served as a mothership to ferry test aircraft aloft, as with the X-15 here, to help conserve the fuel that the experimental planes would need to reach great speeds and great altitudes.

In this photo, 1st Lt. Joshua Stephens inspects a B-52s payload of 500-pound Mark 82 general purpose bombs. The plane can drop up to 51 of these particular bombs in a single run.

A B-52 pilot gives the thumbs-up before taking off on a bombing mission over Iraq sometime in the last decade.

More recently, in January 2016, the B-52 was flown over South Korea in a show of strength in response to North Korean nuclear tests.

The mother ship tradition continues into this century. Here, anunmanned X-51A Waveridercatches a ride on a B-52 for a test flight in 2009.

In November 2004, in part to demonstrate the continuing relevance of its long-distance bombers (the B-1 as well as the B-52), the Air Force participated in exerciseResultant Fury. Could a B-52 hit a ship at sea? Yes — witness the remains of the USS Schenectady, a decommissioned tank landing ship used as a training target.

In September 1996, to give an extreme example of that endurance, a pair of B-52s traveled from Barksdale AFB in Louisiana to Baghdad to launch cruise missiles at power stations and communications facilities as part ofOperation Desert Strike. The round trip totaled 16,000 miles in 34 hours.

The X-15 launches at 45,000 feet, already moving at 500 mph or better, in this photo from 1959. The X-plane typically was propelled by its rocket engine for about 1 to 2 minutes, then flew for 8 to 12 minutes without power before coming to Earth in a 200-mph glide landing.

Air Force personnel load bombs — free-fall, unguided, general-purpose 750-pound bombs — on a truck at Andersen Air Force Base in Guam for delivery to a B-52.

The 419th Flight Test Squadron has also tested LITENING laser targeting technology on the B-52.

During a training run over Nevada, a B-52H lets loose a load of 750-pound bombs. The H model was the final one in the Stratofortress line, and its the only one in the Air Force inventory today; 102 of them were delivered to the Strategic Air Command between May 1961 and October 1962.

In May 2015, two B-52H stratofortress bombers flew a non-stop, 14,000-mile training mission from Louisiana to Jordan as part of the Eager Lion 2015 exercise.

The Air Force says the life span of the B-52 could extend to 2040 and beyond, and its got the engineering analysis to prove it.

A special targeting pod provides pilots with infrared and TV imagery while lasers scan the ground underneath. The lasers can also be used to point out specific locations of interest for troops on the ground.

This view of and from the cockpit shows the pilots bringing a B-52 in for a landing at Tinker AFB in Oklahoma for depot maintenance. The B-52 has a crew of five: aircraft commander, pilot, radar navigator, navigator, and electronic warfare officer.

It isnt always practical — or cheap — to take aircraft into the air for training. The next best thing for B-52 crew members could well be this simulator at Barksdale AFB. Fitted around the simulated cockpit is a big projection dome; hydraulic actuators provide what the Air Force says is realistic motion.

Navigators keep tabs on a bombing mission during Operation Iraqi Freedom in the first decade of this century. Although the last B-52H was delivered to the Air Force in 1962, the aircraft have been updated. In 1989, for instance, GPS was incorporated into the navigation system.

Also from the Eisenhower years, this is the B-52A, the first production model, on the occasion of its maiden flight on August 5, 1954. The locale is Boeing Field in Washington.

The U.S. Air Forcerecently announced plansto send the legendary — and intensely powerful — B-52 Stratofortress bomber into battle yet again, this time against ISIS targets in Iraq and Syria.

This gentleman is managing the training inputs for the simulator as aircrew members run through an aerial refueling.

This brave soul is NASA test pilot Milt Thompson, and the test aircraft attached to a pylon under the wing of the B-52 is an M2-F2 lifting-body aircraft.

In recent years, B-52s were active in both wars in Iraq, and also have seen action over Afghanistan. In addition to bombs, the B-52 can carry cruise missiles; in one night mission in March 2003, the Air Force says, B-52s launched around 100 cruise missiles during Operation Iraqi Freedom.

Make no mistake: Our nations B-52 fleet is ready for action.

Bombs from a B-52 hit ground positions in Vietnam during Operation Arc Light.

At Barksdale AFB in Louisiana, this display shows the variety of munitions a B-52 might carry. The B-52 has a wingspan of 185 feet, and its length from nose to tail is just under 160 feet. That tail stands just over 40 feet high. It can carry a payload of 70,000 pounds. The B-52s power comes from eight Pratt & Whitney TF33-P-3/103 turbofan engines, each providing up to 17,000 pounds of thrust.

Fortunately, the Cold War came and went without those ballistic missiles leaving their silos in anger. But tensions between the superpowers boiled over in other ways — as in the Vietnam War, where B-52s first saw combat in June 1965. Among the missions were carpet-bombing runs against enemy combatants under the dense jungle canopy. Here, a Big Belly B-52D — modified to carry a greater number of bombs — unleashes a 60,000-pound bomb payload over Vietnam.

The planes will replace the B-1 Lancer in strike missions as the latter undergo maintenance and modernization.

So how much cheaper is it to use the flight simulator? The Air Force says that the cost of an hours flying time in an actual B-52 is about $16,000. The simulator comes in at just $400 an hour.

The B-52 bombers are expected to deploy sometime in April 2016 to take part in Operation Inherent Resolve.

The individual B-52s may be old, but many of the planes in the fleet have received some serious high-tech upgrades in recent years.

The airborne behemoth proves that old doesnt have to mean outdated, even in an era of rapid technological change. Just the opposite: Through good maintenance and occasional updates, vintage tech can hold its own against flashier, more expensive, more finicky next-generation designs.

This photo from the 1960s captures the sense of urgency that underlay the mission of the Strategic Air Command during the height of the Cold War. According to the Air Force, 50 percent of the SAC bomber and tanker force was on continuous ground alert and ready to take to the air immediately if early-warning systems were to detect ballistic missiles launched from the Soviet Union.

This is the B-1 Lancer, the plane the B-52 will be replacing.

B-1 Lancer bombers have flown 490 sorties against ISIS during their six-month deployment in the Middle East. In December 2015, B-1 bombers supported the Iraqi army in their attempt to retake Ramadi.

A B-52 flies side-by-side with the (relatively speaking) new kid on the block, the B-2 Spirit bomber, which was unveiled to the public in 1988 but which didnt really go into service until well into the 1990s. Over the decades, Boeing built more than 740 of the B-52 aircraft, the last one way back in 1962. By contrast, the U.S. Air Force has an inventory of only about 20 B-2s.

Way back when: This is the prototype XB-52 Stratofortress, used as a test aircraft for all of its service life, in flight in 1953. It featured a canopy-type cockpit, rather than the side-by-side cockpit of the production models.

Heres the view the other way, looking backward through the cockpit of B-52H in 2010. The aircraft can fly at 650 miles per hour and has a ceiling of about 50,000 feet. Its range is 8,800 miles, but that can be greatly extended with midair refueling. The use of aerial refueling, the Air Force points out rather drily in itsB-52 fact sheet, gives the B-52 a range limited only by crew endurance.