A tour of the legendary USS Missouri

A tour of the legendary USS Missouri 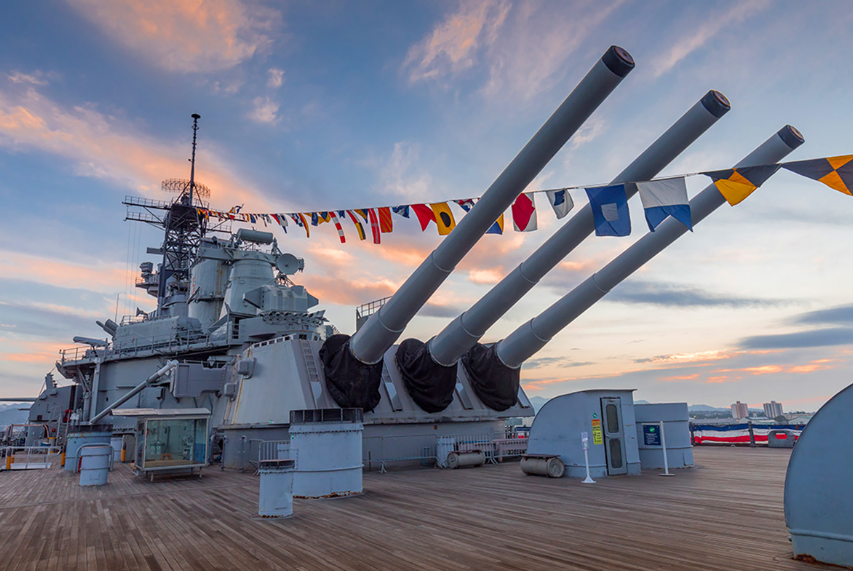 The awesome steampunk console is around the corner on the right from this picture.

The Captain got his own kitchen (and staff). This mediocre photo was taken through a tiny pass-through door, which is as close as I got.

Yet another stop on the Heart of the Missouri tour: one of the massive boilers that supplied steam (and by extension water and power) to the ship.

Big bed, and a window. Not bad. He got his own private bathroom too (to the left, out of frame).

Each armor-piercing shell weighs as much as a small car (2,700 pounds).

Line up and get your grub. Adorably, the Missouri hosts a program for local school kids where they can spend a night on the ship and eat meals cooked in the main galley (which is through the pass-throughs on the left).

Something about the quiet, heavy equipment and moody lighting made this room really cool.

This is the hatch to the armored section of the Navigation Bridge (see next slide).

To get this shot, I used a really wide angle, but that belies the narrowness of these bunks. I wouldnt have been able to walk straight down this passage; Id have to walk at an angle. Under each bed is a small storage space.

The Mighty Mo was decommissioned in 1992, so this is some excellent old-school computer gear.

This is what the bunks would have looked like during WWII.

The Officers mess. The tables could double as surgical tables during an emergency.

Not much of a view. To get this shot the camera is pressed against the back wall. Even with an extreme wide angle, I couldnt get much. This room istiny.

The Captains Quarters arent accessible on any tour. You can, however, book the room for a special event. How cool is that? Im guessing the projector is not original equipment. (I believe it was an Optoma.)

Clearly being an officer is where its at, though sometimes not even then. This cabin had a window, but some of the others didnt.

Ever wonder what it takes to fire one of those massive main guns? Well, a brass-handle with a simple trigger. Thats it.

Generally the radio room is off limits (not to us!). But a few times a year during special events, they fire up the shortwave and talk to other retired vessels.

The historic and celebratedUSS Missouriis one of the last surviving US battleships. Not present at theattack on Pearl Harbor, she arrived shortly thereafter, in December 1944, and saw battle across the Pacific and around the world. Todayyou can tour the Mighty Mo, as I did. Its docked on Ford Island in Pearl Harbor, on Battleship Row. The USS Arizona and its memorial rest nearby.

Off the main room is the Captains spacious bedroom — spacious for a battleship, anyway.

It reads: Over this spot on 2 September 1945 the Instrument of Formal Surrender of Japan to the Allied Powers was signed thus bringing to a close the Second World War – The ship at that time was at anchor in Tokyo Bay. Latitude 35 21 17 North. Longitude 139 45 36 East.

The rear deck (to the left in this photo) in WWII was used for launching and recovering (with a crane) seaplanes. Now its open and can hold special events. There was a tent set up when I was there.

Like any city, floating or otherwise, there are lots of offices. Dentists, lawyers, payroll, and more all have their own spaces. As often as they can, the Missouri museum had the occupants of these offices supply items from when they were there. Not sure if that includes the Compaq desktop you see here…

The nine16-inch, 50-caliber gunseach weigh as much as the Space Shuttle. Two weigh as much as a 747 aircraft. They were the largest guns fitted on a US battleship. Within 90 seconds, 27 rounds (shown in the next slide) can hit a target up to 23 miles away. Because of their design, the ship doesnt rock while firing. Wrap your head around that.

The main tour gets you to the main deck and up. If you want to go into the bowels of the ship, you need to go on the guided Heart of the Missouri tour. Down below you get to see the inner workings, like these heavy-duty ducts that carry, um, things ducts that carry — like steam, maybe?

The Combat Engagement Center. Tracking everything in the area, good or bad, and control of weapons both defense and offensive. I love the sign.

While in port, most warships face out to the sea, ready to fight. TheMissouriinstead faces toward the Arizona and her other fallen sisters, lost in the attack on Pearl Harbor. In over 50 years of service, through multiple wars, the Missouri never lost a hand in battle.

Theres artwork all over the ship, originally done by the crew. This one, in the boiler room pictured in the last slide, is where they came up with the name for the special tour.