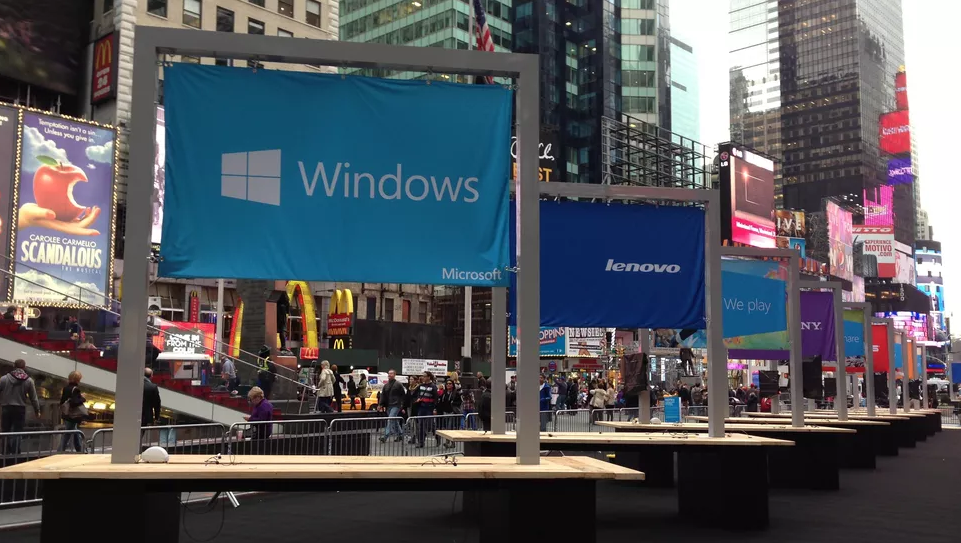 Microsofts store features a check-out area in the middle and broad windows that give customers a view of Times Square. Melinda George, the store manager pictured in pink at the bottom of the photo, says the store is already running short on Surface supply after being open less than a day. Its likely to run out of certain items, she added. She declined to provide any details about sales numbers, but many of the people leaving the store between 9:30 and 10:30 a.m. ET had bought a Surface.

Microsofts pop-up shop bears a striking resemblance to the locations of that other big company, Apple. Everything from the flooring to the employees looks similar to Apples hallmark store design. Like Apples stores, the Times Square Windows Store has numerous tablets set up with room for customers to play with the companys devices.

Federico Comes and Carlos Vargas (both seated) receive a demo from a Windows Store employee. The two men are attorneys visiting the city for work from Puerto Rico. They first saw the store last night and decided to come back today so each could buy a Surface. Vargas says he considered buying a Nook but didnt like its limitations. He says he likes that the Surface is less expensive than a laptop but still features many programs he uses on a PC. And Comes adds that everyone in Puerto Rico will be jealous.

One of Microsofts Windows Stores is housed in Manhattans busiest neighborhood — Times Square on the corner of Broadway and 46th Street. The area sees a plethora of business people, tourists, and other visitors throughout the day and night. That makes for an interesting assortment of customers at the Windows Store. The Times Square location is open 24 hours a day this weekend and will then be open from 8 a.m. ET to 1 a.m. daily through the holidays. The other New York Microsoft store is in the Time Warner Center near Central Park.

Microsofts pop-up store is only going to be open for a short time, but the company is considering opening a permanent location somewhere in New York, store manager Melinda George says. Thats because of the absolutely overwhelming response of visitors, she notes. It has been packed with people.

A Windows Store employee shows off Surface features to a prospective customer. All employees wear brightly colored shirts that either say Click in and do more beneath the word Surface or Click in below the Surface name and an image of the tablet. Not all employees are tech experts, but theyve all received a lot of training about Surfaces features and the differences between Windows 8 and Windows RT, the store manager says. The basic qualification to get a job at a Windows Store: a smile, she adds.

If you want to check out Microsofts Windows Store, you may have to wait. By 10:30 a.m. ET today (October 26), the store was at capacity and customers had to line up outside. A security guard says about 200 people entered the store between 9:30 and 10:30 a.m. ET, and about 1,000 had visited since he started his shift at 6 a.m. And a Microsoft rep says the store was busy all night long with people lined up for its late-night opening. She estimates about 600 people were waiting when the store opened at 10 p.m. ET.

Microsoft has sponsored billboards and other marketing in New Yorks Times Square to promote its new operating system and tablet. The ads include some signs for partners, like Lenovo and Sony, but the majority are focused on Windows and Microsofts new Surface tablet. The signs pictured here are on the couple blocks leading to a pop-up Windows Store.